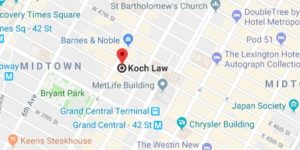 At Koch Law, we handled a wide range of cyber, computer, and fraud defense in New York. The prior experience with these specific, and often complicated, crimes has earned our firm a reputation as one of the top white-collar criminal defense firms in the area.

Why You Need a New York City Cyber Terrorism Lawyer

Cyber terrorism is a growing problem in New York and across the United States, which also makes more people susceptible to charges of cyber terrorism. Specifically, cyber terrorism is the use of computers and computer networks to make threats or carry out harmful acts that result in loss of life or finances or lead to bodily harm. The intended result is not just harm to the direct victim of cyberterrorism, but interference with broader infrastructure.

An experienced New York cyber terrorism lawyer, like those at Koch Law, will often work with clients facing charges involving:

Currently, there isn’t a state law in New York that separately punishes people that commit cyber terrorism. Instead, New York City defense counsel for cyber terrorism must be familiar with a different set of criminal laws. In New York, cyber terrorism is charged under the same laws as these other computer crimes:

As a New York City Criminal Lawyer, Koch Law may also take cyberterrorism cases that are charged under federal law.

The USA Patriot Act passed in 2001 deals with several different aspects of cyber terrorism, including providing criminal punishment for individuals that use a computer or computer network to cause $5,000 or more in damages, adversely impact someone’s medical examination or treatment, cause another person injury, create a threat to public health and safety, or damage a government computer that is used for national security purposes.

Charges for cyber terrorism are extremely serious and a conviction could have a lasting impact on your ability to apply for certain licenses or find employment in some industries. Plus, there is a more immediate and worrisome chance that you will serve time in jail for a cyber terrorism conviction.